I thought I'd include a few pictures from Hyder, Alaska here, as well as one comment about border security.

First, I need to mention that Hyder had over 30 feet of snow this past winter (yes, feet), which I can't even begin to comprehend. This was twice their average, so it was bad news for them, and also for me, because I could only get a few hundred feet down the main road before it was blocked by a huge mountain of snow (with six snowmobiles parked on the side of the road).

My first picture of Hyder is of the main road, and nope, it's not paved. 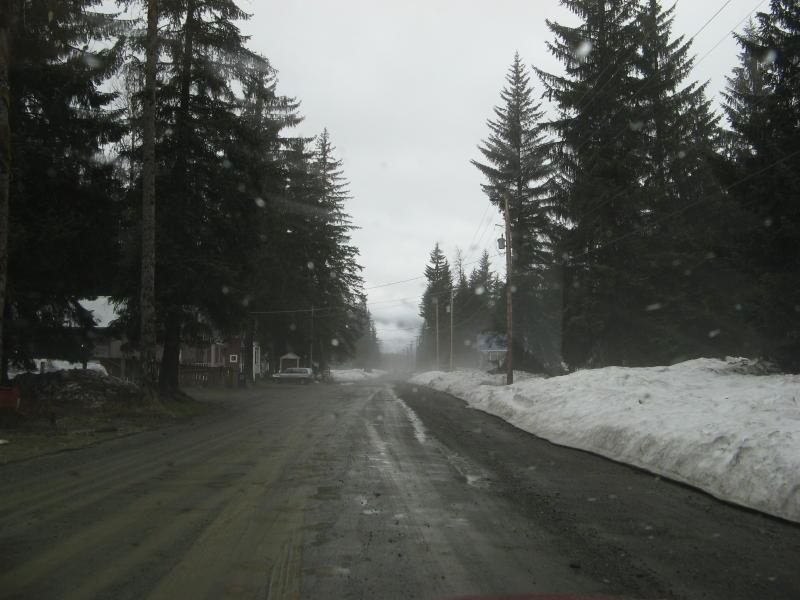 That picture was after I was already in the town. I wish I'd snapped a few pictures earlier, but I didn't.

Next, a picture of the local grocery store: 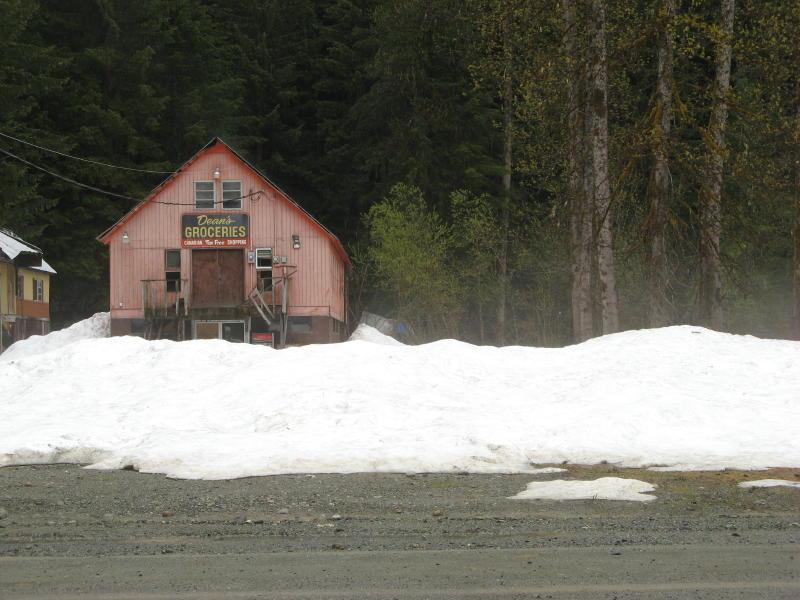 Another cool picture I didn't get was of the local post office. First, I was amazed to find a post office here. And when I did it was really a slightly elevated trailer (and the roof would have been way under 30 feet of snow, so I don't know how they managed that.

When I found the post office I thought it would be cool to send postcards from this remote little place, so I dug them out of the car, filled them out, and gave them to the lady working there. She reminded me of the actress Holly Hunter, with a neat accent that I can't begin to describe.

Where is Hyder, AK?

Looking at Google Maps, I'll guesstimate that, as a crow flies, Hyder is about 100 km from Ketchikan, AK (about as far south and east you can get and still be in Alaska). Unfortunately humans can't fly like crows, so Google Maps tell me it's a 614 km drive from point to point. This is the home of the Misty Fiords National Monument, and believe me, the area is spectacular.

I debated about writing this next part, but in the interest of honest reporting I will.

To my surprise I was able to cross the border from Canada into the U.S., and there is no U.S. border security here at all. You can walk, drive, crawl, or ride a bike from Stewart, BC right into Hyder without showing any identification at all, because there's no place to show it.

That really freaked me out, because before driving over I stopped on the side of the small road to make sure I had my documents all ready, and I was prepared to answer all the expected questions, have my car inspected, whatever. So I drove down the road and the next thing you know I'm in Hyder -- no stops, nothing. I paused for a moment, looked around to make sure nobody was chasing me, and then rolled slowly into the town.

Interestingly, when you come back into Canada there is a custom's stop, and the woman here asked all the same questions the other guy did when I crossed into Canada from Washington.

(In retrospect I don't really think this is a major deal, because as I would later cross the border from Canada into the U.S. again, I realized just how big the border between the U.S. and Canada is. Unless there are a lot of patrol people hidden out there in the woods, there are probably hundreds of miles of border territory, and a lot less security than I expected.)