When most people refer to the Alaska Permanent Fund, they're probably referring the Alaska Permanent Fund Dividend checks that are distributed to Alaska citizens in October of each year. Citizens receive the dividend checks just for living in Alaska. These checks average about $1,200 per citizen per year, so a family of four will receive a check for approximately $4,800 every October.

Why are people paid to live in Alaska?

As near as I can figure, in 1969 the Alaska state government leased the oil fields to oil companies. As a result, the state received a $900M bonus check (presumably from the oil companies), which they promptly managed to spend. ($900M in 1969 is a whopping amount of money, equivalent to at least $2B today (assuming a 4% yearly inflation rate)).

The Alaska Permanent Fund Corporation sets aside a certain share of oil revenues from each year to benefit the current and future residents of Alaska. This corporation currently manages a pool of money that has grown to $36.9B dollars. This money is currently invested in a variety of stocks, bonds, and other financial instruments, as you can see on this figure: 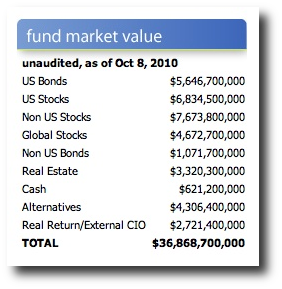 While this principal dollar amount is constitutionally protected, any income earned by the Fund is constitutionally defined as general fund money, and the Alaska state government officials can therefore appropriate this money for any purpose. That being said, using this money for anything other than for Permanent Fund Dividend checks (PFD checks) to Alaska state residents is considered potential political suicide.

Here is a statement about the Alaska Permanent Fund from the Wikipedia page:

The Fund grew from an initial investment of $734,000 in 1977 to approximately $28 billion as of March 2008. Some growth was due to good management, some to inflationary re-investment, and some via legislative decisions to deposit extra income during boom years. Each year, the fund's realized earnings are split between inflation-proofing, operating expenses, and the annual Permanent Fund Dividend (PFD).

Who qualifies to receive an Alaska Permanent Fund Dividend check

I need to research this more, but my understanding is that to be eligible to receive an Alaska Permanent Fund Dividend check you must be an Alaska state resident for at least one full year. In my case, since I moved here in March of 2010, my first full year of Alaska residency will be 2011, so I won't be eligible for a PFD check until October, 2012.