2011 Iditarod standings, March 14 - John Baker continues his lead in the 2011 Iditarod race. As mentioned yesterday, the Iditarod race has currently become a battle of who can sleep less, with mushers resting only two or three hours at a time, and in some cases stopping only a minute or two at race checkpoints.

According to the current standings posted just minutes ago, John Baker checked in and out of the Elim checkpoint while no other mushers have checked in there yet. Even more importantly, Mr. Baker's dog sled team is moving at a speed of 8.09 miles per hour, and the only other musher moving close to that speed is Dallas Seavey at 8.04 mph, which has helped him move up to sixth place. Other Top-5 mushers are running at a maximum speed of 7.22 mph.

Here's the 2011 Iditarod race current standings as of about 10am this morning: 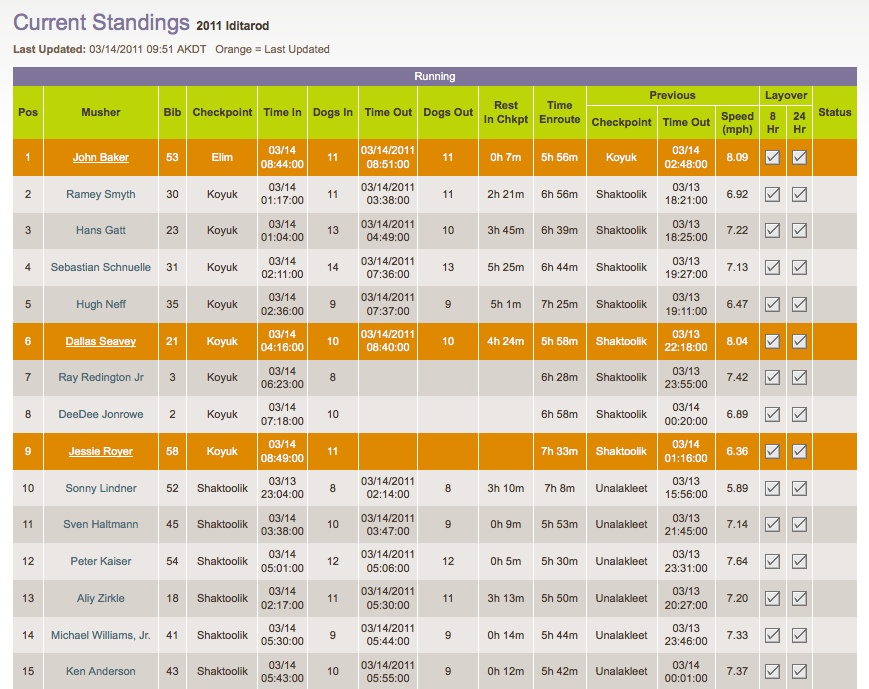 The race to Nome, Alaska

I read this morning that the race winners are expected to ride into Nome as early as tomorrow afternoon. I believe they are required to take one more eight hour rest. With John Baker now out of Elim, Alaska, he now has less than 123 miles to travel to get to Nome, Alaska. (Here are the Iditarod race checkpoints and distances.)