2011 Iditarod race, current standings: It's the evening of March 11, 2011, about 7pm, and the Iditarod mushers continue to blaze their trails across the Alaskan wilderness.

As mentioned this morning, musher Hugh Neff appears to be in the lead, having come through the Grayling checkpoint just five minutes before John Baker, and 47 minutes before four-time defending champion Lance Mackey.

Here are the current standings of the top fifteen 2011 Iditarod mushers at this time: 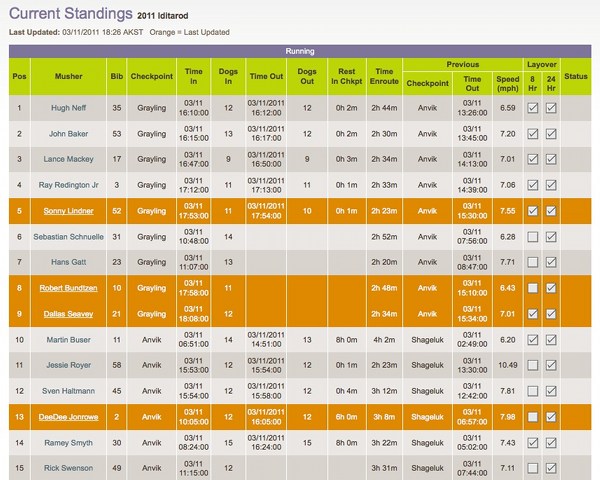 As you can see on my Iditarod checkpoints and distances page, the distance to the next checkpoint (Eagle Island) is sixty miles, while the distance from Anvik to Grayling was only eighteen miles.

As usual I'll try to update my list of 2011 Iditarod current standings at least once or twice a day. I hope it will be fun and interesting to look at the twists and turns of the race after the race is over. Of course for the most up to date 2011 Iditarod race information, please see the official iditarod.com website.