With the 2011 Iditarod well underway, I thought I'd see what I could learn about Nome, where the Iditarod race ends. Here are the Nome, Alaska facts, information, and history items I've uncovered in my research.

Nome, Alaska is located on the western tip of Alaska, about half way up the main body of the state of Alaska. Here is a map of Alaska (courtesy of Google Maps) that shows the location of Nome relative to other Alaska cities like Fairbanks and Anchorage: 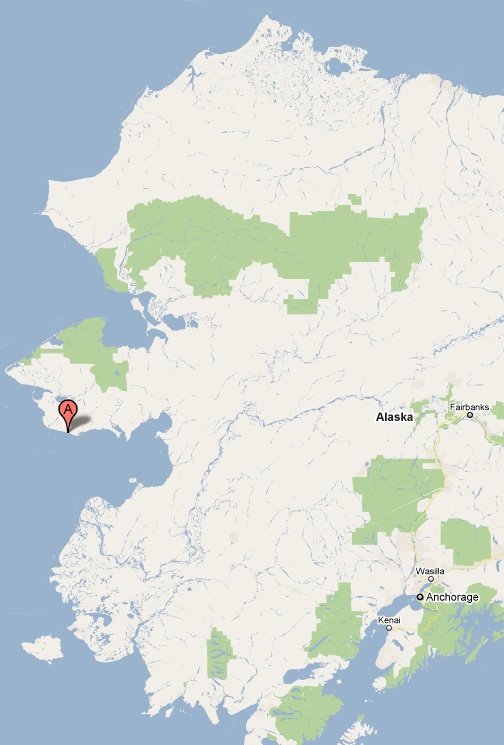 On that map, Nome is represented by the red/orange pin with the letter "A".

As you can guess by that location, there are two main ways to get to Nome: By air, and by sea. (More Nome travel information below.)

According to Wikipedia, in a 2008 State of Alaska certification, the population of Nome was 3,570, and by the next year it had risen to 3,653. (The Official Iditarod Guide lists the population as 3,505, but I just tracked down this number, and it dates back to the 2000 census.) The Nome, Alaska population was believed to be as high as 20,000 people during the gold rush era; see below for more information.

People with an "American Indian" heritage make up nearly 50% of the Nome, Alaska population. People listed as "White Alone" make up 31% of the population. See this city-data.com web page for more information.

Nome, Alaska and the Iditarod

The Iditarod Race came into being in large part because of a diphtheria epidemic in Nome, Alaska in February, 1925. Nome citizens needed a diphtheria serum to fight the epidemic, and the only way to get the serum to Nome in the middle of winter was to use sled dogs and mushers. This background story eventually led to the creation of the Iditarod Race in 1973.

According to Wikipedia the origin of the name "Nome" is still under debate, with one possible story being that the name "Name" was mistakenly read as "Nome", so a mapmaker used "Nome" as the name of the city. Another possibility is that the name Nome was given by the city's founded, Jafet Lindeberg, originally of Norway. Near his childhood home in Norway there is an area known as Nome Valley.

With Nome, Alaska being at almost the exact same latitude as Fairbanks, Alaska, you'd expect Nome to get extremely cold in the winter, but it doesn't; at least not as cold as Fairbanks. Even in the coldest winter months of December through March, the lowest average low temperature in Nome, Alaska is -2 degrees Fahrenheit.

Temperatures in Nome are moderated by it being a city on the ocean, where the relatively warm ocean currents help keep the town warm (again, relatively warm). By comparison, Fairbanks, Alaska reaches average low temperatures of up to -19 degrees Fahrenheit during the winter months.

Nome also reaches average high temperatures in the fifties during the summer months, peaking with an average high of 59 degrees in the month of July.

The history of Nome, Alaska belongs to the Inupiat, at least until the discovery of gold in the summer of 1898. In that year three Swedish men discovered gold on Anvil Creek, and by 1899 Nome's population had risen to 10,000 people.

In that year gold was found in the beach sands along the coastline, between 1900 and 1909 the Nome population was estimated to be as high as 20,000, though the highest recorded census population was 12,488 in 1900.

Wikipedia mentions several stories of gold thieves during this time, including corrupt politicians, and these stories became the basis for a best selling novel, a stage play, and a movie that has been re-made five times so far, including the John Wayne movie "North to Alaska". Wikipedia also mentions that Wyatt Earp also stayed in Nome for a short time.

By 1910 the Nome population had dropped to 2,600, and fires and storms destroyed much of the Nome gold rush architecture.

1925 Epidemic The 1925 Nome diphtheria epidemic required the use of dog sled teams to deliver the diphtheria serum from Nenana, Alaska to Nome. Dog sled teams alternated the delivery of the serum to Nome, and the lead dog of the final dog sled team was named Balto, whose name has been made famous in a variety of ways over the years, including a statue.

While Balto gets all the credit, another lead dog named Togo is "considered the forgotten hero" of this effort to get the serum to Nome, Alaska.

World War II Wikipedia reports that during World War II, Nome, Alaska was also the last stop of the ferry system for planes flying from the United States to the Soviet Union for the Lend-Lease program.

Getting to Nome, Alaska

You can't drive to Nome, Alaska (or I would have been there already). Instead the most common way for tourists to get to Nome is by airplane. The Nome Airport offers flights from several air carries like Alaska Airlines. Two people I met at the Iditarod last week were going to fly to Nome from Anchorage this week on Alaska Airlines to be in Nome for the end of the 2011 Iditarod race.

There are also water ports in Alaska that are used by freight ships and cruise ships. (I need to research this "cruise ship" statement, because I don't recall seeing that in my Alaska travel guides before.)

Nome, Alaska may also be the home to the world's largest gold pan, though the city of Quesnel, British Columbia in Canada disputes this claim. The gold pan is on display as a "Welcome to Nome" sign in the Nome, Alaska Anvil City Square area.

Wikipedia and other website have been very helpful in providing this Nome, Alaska information. Here are links to the most useful websites I've found so far:

I hope this Nome, Alaska facts, information, and history page has been helpful. With my current interest in the Iditarod (the 2011 Iditarod race, to be specific), I'll try to keep digging up more Nome, Alaska information.