My Alaska bridge to somewhere project

My Alaska Bridge to Somewhere project: While nobody has asked me what bridge I'd like to build in Alaska, my first choice is -- and has always been -- a bridge to make it much faster to get from Anchorage to the Kenai Peninsula. The current long drive around the Turnagain Arm is certainly nice for first-time tourists -- especially if you don't mind getting in a caravan behind a slow-moving RV until your head explodes. But after you've been down that road a few times, what you really want to do 98% of the time is just get to the Kenai Peninsula.

That's where my Alaska Bridge to Somewhere project comes in: 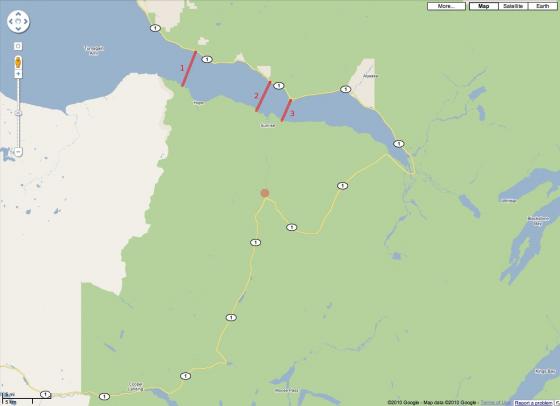 (Click that map for a larger image, or better yet, right-click the map and open the image in a new window.)

(Note: For non-Alaskans, I messed the map up a little bit ... Anchorage is just barely off the top-left corner of the map. Seward would be on the bottom-middle of the map, just below Moose Pass. Kenai, Soldotna, and Homer are off the map to the bottom-left.)

As you might be able to guess from my map, I can see at least three places where a bridge can be built to make it significantly faster to get from Anchorage to the Kenai Peninsula and all points south, including Seward, Kenai, Soldotna, and Homer. By my measurements, a bridge in any of these three spots will save about thirty miles off the travel from Anchorage to the Kenai Peninsula, and back again.

That may not seem like much to you, but if you factor in (a) the shortened distance and (b) the bridge and new roads can be a constant four-lane highway and not a mix of two-lane and four-lane highways on (c) winding roads, I believe this will make for much shorter travel times.

My Alaska bridge - Shorter commutes from Anchorage to the Kenai Peninsula

For instance, Google Maps currently reports that the travel time from Anchorage, Alaska to Seward, Alaska is 127 miles, which you can navigate in three hours and thirteen minutes (3:13, an average of approximately 40 mph). Using any of the three bridges shown, and assuming you can drive 55-65 mph on the bridge and new roads (which again are four lanes instead of a mix), I'll guess that the travel time to the red dot shown on the lower part of the map can be reduced by 30-60 minutes, making the travel time from Anchorage to Seward as low as two hours and fifteen minutes.

Say what you will, but a difference from three hours down to two hours is a 50% reduction in time. If I'm living in Anchorage and thinking about running down to Seward for the weekend, just knowing that my commute is going to be much easier is a win.

Also, for those that don't know it, the current road around the Turnagain Arm is notoriously dangerous, and there are many accidents and several deaths on the road every year. That's one reason I show Bridge Option #1, to get off that road as soon as possible.

If I live anywhere in the Kenai Peninsula and I'm interested in tourism -- and my own shorter commutes to Anchorage for things like shopping and health care trips -- I have to be in favor of these bridge plans. In my own case, if I had moved to Homer or Seward this spring, and then had to commute back and forth to Anchorage all summer before finally having my gallbladder removed in November, all I can say is wow, I couldn't take that drive, and for that reason alone I'm glad I ended up in Wasilla.

More on my Alaska Bridge to Somewhere project

Sorry, I'm out of time for this morning, but I'll come back and add more details to this blog post on my "Alaska Bridge to Somewhere" project in the near future.