Brownie in Hyder, Alaska (for the kids)

Here are a few pictures I took while on the mountain road around Hyder, Alaska. I took these pictures for some third-grade students in Kentucky after they sent me this stuffed animal they named "Brownie".

Brownie actually made the trip more fun. A lot of times I would think "Oh, I don't feel like stopping, I just want to keep driving", and then I would think about Brownie and the kids, so I'd pull over and take a few pictures. This always ended up being a good thing.

So, for the kids out there, here's Brownie with the scary mountain road behind him: 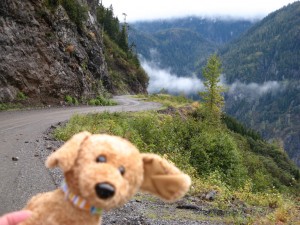 Here's Brownie with a glacier behind him: 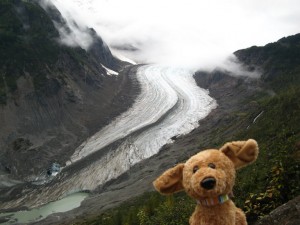 And finally here's Brownie posing on the top of the car, next to my two extra gas tanks, with the glacier in the background: 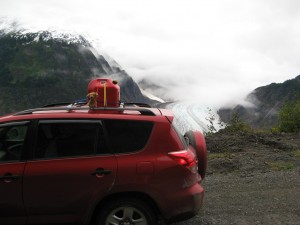 (After nearly running out of gas on my first trip through Canada, I decided it would be a good idea to carry some spare gas on my return trip.)