The view from Hyder, Alaska

I think it's pretty darned funny, the first time I came to Stewart, British Columbia, and Hyder, Alaska, I was pretty badly freaked out, lost, and running out of gas. I was cruising down a mountain with my car in neutral, essentially praying there was going to be a town and a gas station at the bottom of the mountain. For all I knew I was about to be starring in the remake of Deliverance.

These days I consider myself insanely lucky to have made this side-trip. Can you imagine that if things had gone according to plan, I would have never stopped in either Stewart, or driven across the border into Hyder? Wow, that just blows my mind away. And when you see these pictures, I think you'll understand why.

This first picture is from a point where I've driven maybe one-half of the way up a scary mountain road in Hyder. Well, I think it's Hyder. Technically, you drive into Hyder (population maybe 50?), take a right, then keep driving as long as you want, or until the road ends, whichever you prefer.

Okay, back to the picture, this is from me looking at a glacier from the long and winding road: 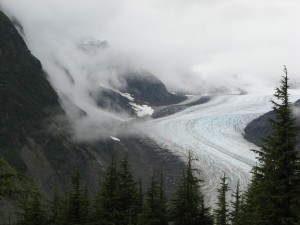 This next picture is a zoomed-in version of that first picture: 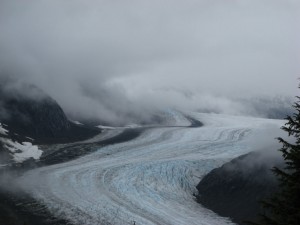 Next, by the time I got to what turned out to be the peak altitude of the road, I found a rest area with these benches: 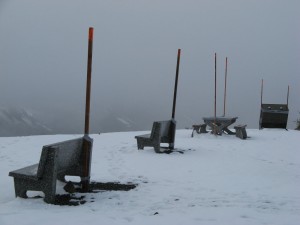 Then later in the evening, back in Stewart, British Columbia, as I was sitting in a pizza parlor, I looked over and saw a picture of Robin Williams. Turns out, a good portion of the movie Insomnia was filmed in this area. I talked to a woman at the restaurant, and she said Robin Williams was very nice, and would often visit in the town, while Al Pacino and Hilary Swank generally stayed in a boat/ship that sat out in the water. 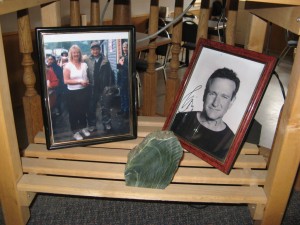 Wow, what goes around, comes around. If it hadn't been for the movie Insomnia I may never have come to Alaska in the first place. But ahh, that's another story.

One final note: These pictures were taken on October 2, 2007. What is the weather like by you each year around October 2nd? Snow in the forecast?