Wow, I haven't felt an earthquake in a while, but we just had a nice one come ripple through. First, a familiar sound that makes you think "Oh crap, we're about to have an 'adjustment'", followed within ten seconds by the apartment building shaking, and me standing under a doorway. Here's an early image from the USGS earthquake website: 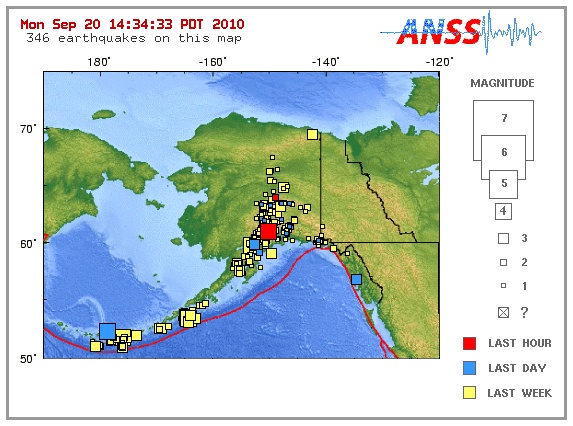 The big red square represents this earthquake. The USGS website reports that this was a 4.9 earthquake centered about 15 miles WSW of Anchorage, Alaska.

I'm trying to think of how to describe that initial sound and then the shake ... it's a little bit like when you're at a big fireworks show, and at the end of the show you hear the 'boom' of the canons, but don't see the fireworks until they erupt like gunfire or canon-fire in the sky. That first 'boom' is a little bit like the first sound you hear with an earthquake. The ground doesn't move too much then, but you know what it is, so you take cover.