Ravens in Alaska: I'm not sure where the ravens in Alaska go to in the summer, but in the winter months I see them everywhere: Anchorage, Wasilla, Palmer, Talkeetna, Seward, etc. If there's ever a major sports team in Alaska, an obvious nickname for the team would be "Ravens".

Here are a couple of pictures of the ravens in Alaska. First, three ravens surrounding one of my neighbor's cars: 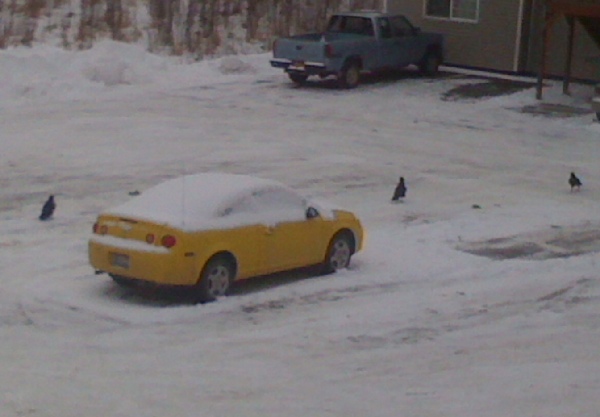 Next, there are five ravens in this photo, which I took in the Wasilla, Alaska Walmart parking lot:

As you can see, ravens are also pretty big birds, typicaly the size of a house cat.

I ran across 20+ ravens in another parking lot, where a man in a truck was throwing food out of his car to feed them, but I didn't bother to get a picture of them. Seeing that many large birds in one place makes for quite a scene, though.

As I run across more ravens in Alaska I'll try to share my photos here. And if I ever figure out why they're here in the winter -- and where they go in the summer -- I'll share that information as well.