Wow, the trip over the Dalton Highway to Deadhorse covered a lot of ground in a very short time, and I won't do it again like that. There were some great views, but it was a steep price.

I essentially started the trip in Fairbanks at around 9am. Fairbanks is a cute little college town, population 29K. The layout of the town reminded me of College Station, TX, home of Texas A&M, where I graduated.

The road from Fairbanks onto the Dalton Highway starts off as the usual hills and mountains with millions of spruce trees. On the way to Coldfoot (about 170 miles up the highway) I ran into a 45-minute construction delay. It seems like they're trying to pave as much of the road as they can, but I don't know their exact plans. Like many other people who were stuck there, I took the opportunity to use the rest room (i.e., the forest on the right side of the road.)

Very early on in the drive I encountered this speed limit sign: 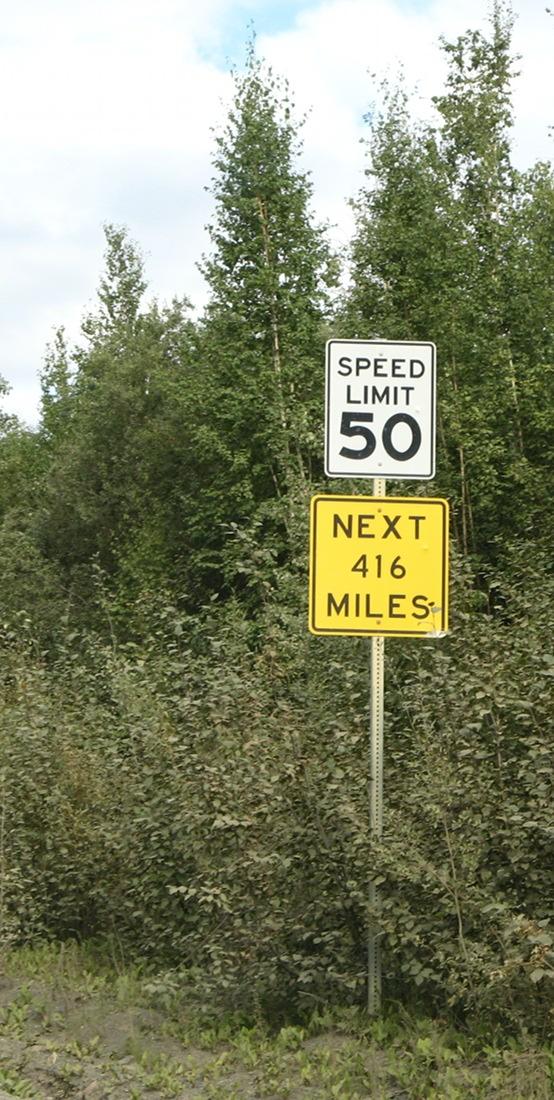 At Coldfoot I filled up the gas tank, and strapped two five-gallon gas tanks on the top of the RAV-4 for backup, and started the 240 mile stretch of "no services" on the road to Deadhorse.

Just north of Coldfoot the hills and mountains get much bigger, with jaw-dropping views, especially with the sun low in the sky. I took almost 400 pictures in this area, and I'll post a few of those here soon. I believe this area is known as the Brooks Range.

Here's one more photo from the drive: 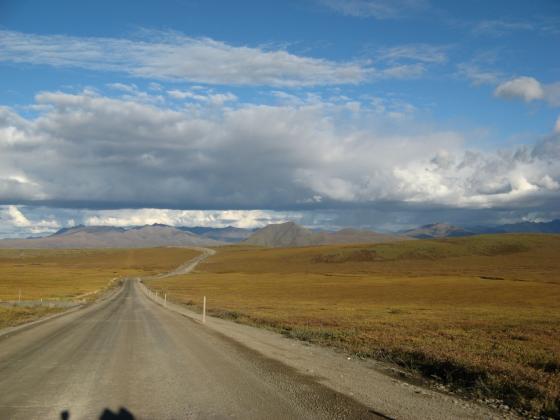 After that the last 100+ miles at the top was big, wide open flatlands (tundra). In this area I saw people camping out, caribou, bow-and-arrow hunters chasing caribou along the pipeline (surreal), red-faced prairie dogs, several different types of birds, but no bears. (With no formal rest rooms along the road you quickly get used to just pulling over to the side of the road, especially when you can see for miles, and you're the only one on the road.)

At the very top, Deadhorse is totally built for the oil industry, with very big trucks and metal buildings everywhere. I got there at 10pm Wed. nite, stayed in a $235/night carpet-stained "room" in a temporary metal building that was so small the door couldn't open all the way, and left yesterday morning around 5:30am. On the way out the temp was 31 degrees, and the fog was incredible. I'd heard reports of bears, so I drove slowly through the town looking for grizzlies or polar bears, but didn't see either, so I got on the road. (BP puts on an oilfield tour, but there were no openings until noon, and I didn't want to wait.)

The Dalton Highway itself varies between dirt and gravel, with several long paved stretches, and one section of deep mud that I was very lucky to barrel through. I drove anywhere from 25mph to 80mph depending on the road conditions and visibility. (Yeah, the speed limit is 50mph.) Some of the hills were so steep and narrow, I would never have considered driving on them if I had a choice. At the top of the worst hills the land drops off so fast you can't see the ground beneath the car for a few moments. It's exactly like being on the top of a roller-coaster ride, right before you go down, except there are no guardrails, and you're in a car on a gravel road. And of course you also have to figure out how to drive up those same hills.

After not seeing much wildlife on the Dalton Highway but the birds, caribou, and a few prairie dogs (?), I saw several moose just 15 miles north of Talkeetna.

At the moment, I'm glad I did it, but I'm also very tired, and glad it's done. I definitely rushed this trip too much.